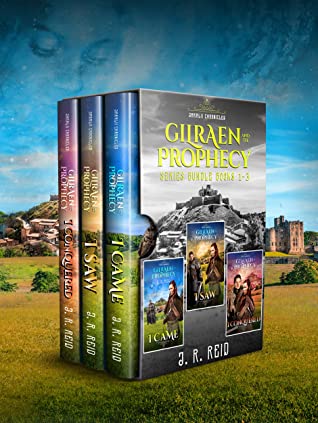 Tony Richardson is a world champion gamer. So, when a friend approaches him to beta test a new game that promises a “fully immersive experience,” he is quick to sign up. The experience proves more immersive than he could imagine. Transported to an alien world, he takes his place in the court of the handsome Prince William. More startling still, he is now a she. Tony is in the body of a beautiful elf woman, the very image of the Prince’s murdered wife. Tony is now a pawn in a deadly, high stakes game for control of Jaralii. However, her abilities, once trained, could allow the pawn to become a queen.

Gilraën (Toney Richardson) has taken her place as a warrior/sorceress in the court of Prince William. Prince Beckworth and his alien Adjudicars are on the march. Elves cower in their realms. Dwarfs look to their dwarrows for refuge. Prince William and his brother King Richard are at a severe disadvantage. However, the pawn has been exchanged for a queen, and the queen begins to dominate the board. Gilraën has trained archer-charioteers. She has compelled the army to make better use of sorcerers. Now, she is gathering intelligence and seeking allies.

Queen Gilraën has come into her power. She has might armies at her command. She has convinced Elves, Men, Dwarves, Orcs, Giants, and Spiders of the danger of Prince Beckworth and his Adjudicars. Gilraën and her armies converge upon the usurper. However, the fate of Jaralii is far from decided. Can Tony (Queen Gilraën) snatch victory from the jaws of defeat? Will Tony ever go home to reclaim his old life? Does he even want to?

Gilraën and the Prophecy is a three-book (or ebook, in this case) set of the Jaralii Chronicles. They are fantasy novels set in the world of Jaralii. Tony Richardson, a computer gamer from our world, is convinced to try a new, immersive experience, and gets more than he bargained for. He is transported to Jaralii to become a new character. He is transformed into an elven warrior/mage. More shocking, he is now a she. Joanne Reid does a wonderful job of world-building and character development. It’s hard not to root for Giraën.

Going through the trilogy, the action scenes developed over time. At first, the challenges Giraën had to face seemed too easy. As she moves through the books I Saw and I Conquered, Prince Beckworth and the evil Adjudicars challenge her more significantly. Definitely well worth the read.