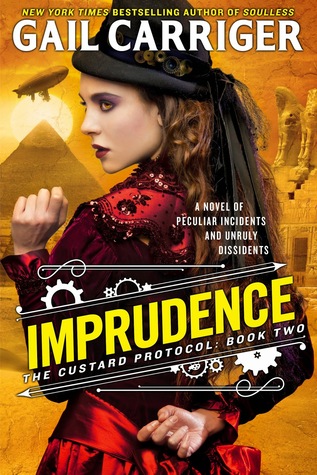 Rue (Prudence Alessandra Maccon Akeldama) and the crew of the Spotted Custard are back from India. The revelations of weremonkeys have shaken the scientific community of the steampunk alternative world of Victorian London to its core. Queen Victoria is not amused that Rue has made a treaty with them. Worse, it cost the empire a source of tea. But, Rue has other problems. Her father is suffering from the Alpha Curse and will have to be replaced as pack Alpha. Rue’s best friend Primrose keeps getting engaged to unsuitable men. Prim’s brother Percy is angry that Rue’s engineer, Quesnel, published a paper on the weremonkeys before him.

Rue decides to take her parents to Egypt where a plague—oddly enough—may keep her father sane for what’s left of his life. However, someone attacks the Custard. Since Percy published a paper on werelions, the Custard’s security officer, Miss Sekhmet, may be in danger. Rue’s skill as an airship captain will be put to the test as will the skill and dedication of her crew. She needs a cup of tea.

The second book of the Custard Protocol picks up on Rue’s return to London. She has upset the queen by making a treaty with the weremonkeys she found in India. As a result, she is stripped of the queen’s protection. She must fend for herself, and there are people who wish her harm. Her family is in turmoil due to her father’s illness. She’s having an affair with her chief engineer, which isn’t going well. Now her werelion security officer is being hunted.

This was another fun story. Character development is witty. The science of steam and airship travel is interesting. The characters are engaging, from the various supernatural and metanatural creatures to the young deckhands. Like the original book, much of the adventure is tongue-in-cheek. It is a little less episodic than Prudence. I’m looking forward to the third book.